But for me fall started over a month ago, September 1st to be exact. Lee argues that fall does not officially start until September 22... blah blah blah...

But if you ask me, summer ends as soon as the thermometer dips into the 40's... Anything below 50 degrees my friends, is. not. summer.

So here we are, our first fall in Chicago. And so far things are already different...

- Our airconditioner has been off for five weeks. We just leave a window open! (This is not something I did in Texas since fall consists of about a four day break in between a 103 degree day and a 35 degree day.)

- Columbia students are back in school, which would explain the exponential growth of persons with nose rings, purple hair and combat boots. (It also explains why the stench of the homeless man on our park bench has been replaced with the smell of marijuana. It's like they think no one can see them, or smell them for that matter, huddled in the corner at 8:15 am.)

- Speaking of the park... the leaves are changing! Like really changing... from green to yellow to orange and red. Not like at home where they change from greenish to brown to browner to dead... 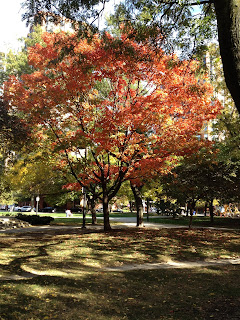 - I've started wearing boots... and a coat. I had to go coat shopping for the first time since college. I will say that not everyone thinks this is coat weather. Some people seem to be totally comfortable in a t-shirt, they are obviously not from Texas.

- Which brings to me to another point... I've had way to many conversations that go something like....

Me: Yeah, Chicago is a great city. I just moved up here in June from Houston.

Stranger: So you haven't experience a Chicago winter yet?

They all have this evil cackle... like they find it funny to watch southern transplants turn into popsicles at the bus stop.

However, they do offer advice...

"We don't do anything for like four months. Load up on TV seasons and movies you won't want to leave the house."

"You want to be covered from head to toe. Seriously. Nothing showing but your eyes, like a burka... a snow suit burka."

A snow suit burka...? Sounds like I will either become a bear and hibernate all winter or I'll be moving back to Texas by the first of the year.

Praying for a looooonnng fall, and a mild winter.