My little brother, Max, came to the Philippines for a visit. Amid the earthquakes, tsunamis, and radiation scares my over protective parents let my 15-year-old brother fly half way across the world on his own. I'm very proud of them. I could actually hear them growing as parents over the phone, or perhaps that was their nervous sobs, I couldn't really tell a difference.
Max came to stay for about 10 days. I was thinking about the last time I spent a solid ten days with my little brother... Family vacation, Hawaii, Christmas, 2006, and I did live with him for the first seven years of his life. Of course I've gone home to visit my parents for weeks at a time, but I don't recall seeing him much between his cross country, football, basketball, and track meets, he's a pretty busy guy. So when I think of my brother, I tend to remember him as his eight year old self. So you can imagine my surprise when he gets off the plane and I confuse him with Justin Beiber. (To be fair, I wasn't the only one. Apparently, Filipinos have also caught the "Beiber Fever.") I kept staring at him thinking... I don't remember him looking like that. And then there's the fact that he talks more than just about anyone I've ever met, and uses a vocabulary that I don't entirely understand, which just make me feel old.
So I had ten days to spend with my little brother, and since he is the only person in my family to visit me in the Philippines... even though we've been here for two years, and even though I've tried my damnedest to guilt people into coming, he's the only one that made it... so I wanted to make sure we got to do as much as possible. (And make everyone else super jealous :p )
Day one I took him to Tunasan, to meet my favorite little kids. He brought with him sidewalk chalk, kaleidoscopes, rubix cubes, and princess crowns, needless to say he was an instant hit. 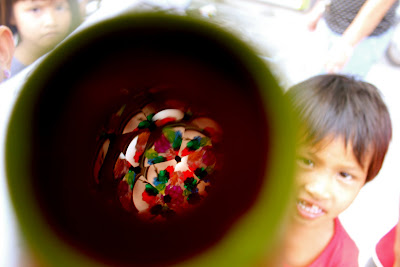 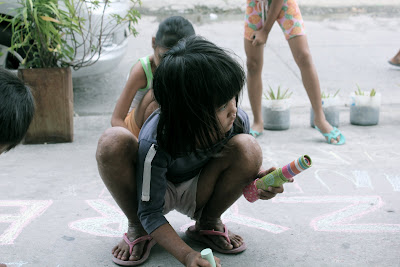 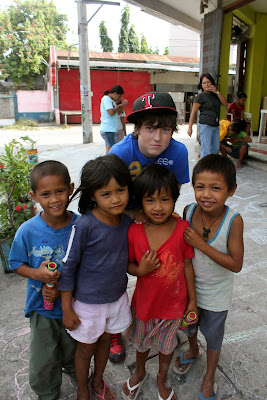 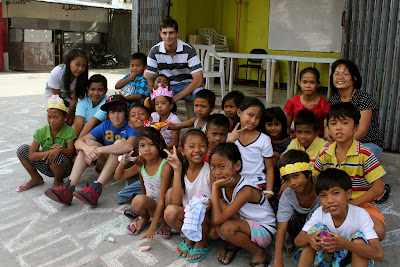 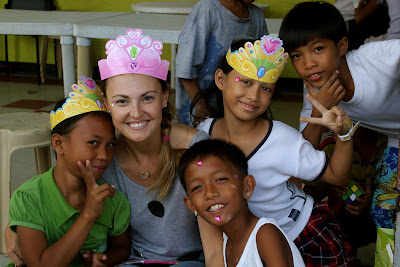 He also brought with him a suitcase full of his, and some of his friends, old running shoes complete with new socks, new shoe laces and new insoles, not to mention a few basketball jerseys he had out grown. The volunteers at the center were almost speechless.
Center Volunteers: Wow, some of these shoes, they look like they've hardly been used.
Me: Hmm...yeah... well, you know... kids... they grown so fast. (Pause...) Well, that's not entirely true, they are also very spoiled.
After a couple hours of playing with the kids we got back in the car to head to Manila.
Me: So, Max, what did you think?
Max: That was awesome. They're so cute. It really makes you realize what all we take for granted in the states.
And that was it. We could have not done another thing the rest of the time and my "Max in the Philippines" mission would have been a success.
***
The next three days were spent in Donsol, where we were to swim with the whale sharks. (Something I should have just kept to myself, and not told my mother because I know she just kept replaying a reel of the "golden child" being swallowed by a large fish over and over again in her head.)
We survived... 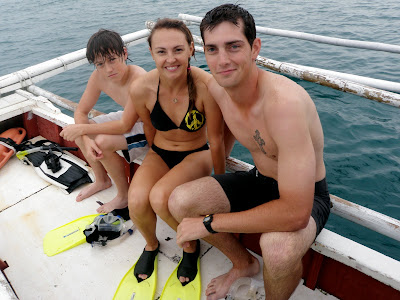 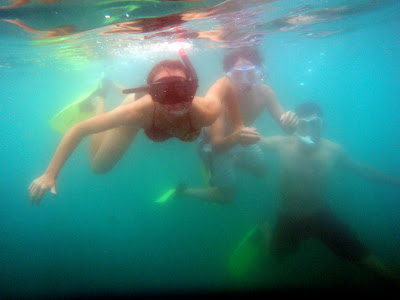 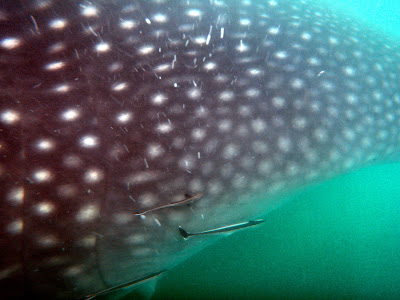 ... despite some close encounters with giant mouths, head on collisions with other snorkelers, and more than a few flippers to the face.
Lee: I just got nailed in the head! I was swimming after the whale shark... trying to get a picture... and all of sudden... WHACK! I get smacked in the face with a flipper! And the lady that kicked me was wearing a thong!!
Me: hahahaha
Lee: What did you do this weekend? Oh, you know... got kicked in the head by a lady with her swimsuit up her butt! God!
Me: hahahaha
Max: Classic.
***
We also went shrimping with local fisherman one night, which inspired Max to say in his best Bubba voice from Forrest Gump, "I know every thing there is to know 'bout the shrimpin' business..." He said this every time he heard the word shrimp, or anything having to do with shrimp, we probably heard it 100 times in 24 hours. That didn't get old at all... 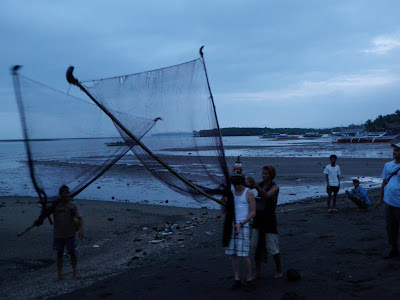 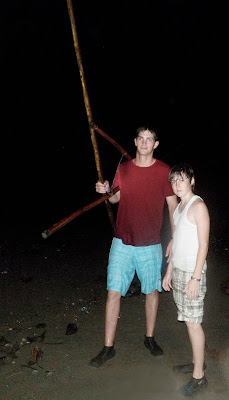 ***
Some of my other favorite pictures from the weekend include...
"The Giant and the Dwarf," taken at the Cagsaua Church which was once burned by the Dutch in 1636, rebuilt in 1724, and then buried by the Mayon volcano when it erupted in 1814. 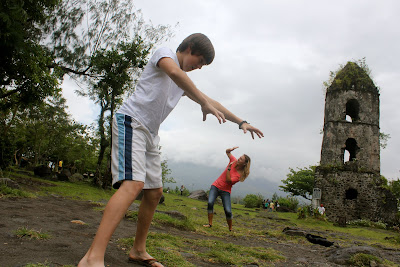 If it wasn't so cloudy you would be able to see the Mayon volcano in the background... bummer.
"The Giant and the Dwarf II," Max's first ride in a tricycle... they were pretty squished. 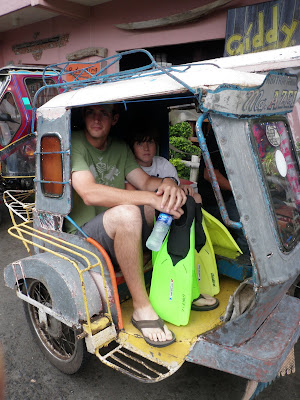 There was no room for me, I had to sit behind the driver.
"When in the Philippines, do as the Filipinos do," Max one on one against one of the local neighborhood boys. 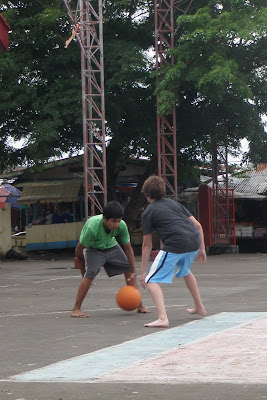 And he played barefoot, in true Filipino fashion.
Part 2 coming soon...
Posted by . at 9:09 PM