I decided to get back in the writing mode...
... right before I went on vacation for a week. Which is why I didn't post at all last week.
This is typical... and just one more reason why my commitment level to writing and my commitment level to exercise appear to be one in the same.
But we already knew that...
***
Moving on...
I went to Singapore! Normally, I break up my vacations into several posts, but seeing as I haven't been writing much lately, I have a lot to say and I don't have time for a Singapore series. So I'm going to keep it short and sweet and tell you the things you need to know about Singapore.
First of all, Singapore is an amazing place, it ranks right up there with Tokyo for me. I find Singapore to be different from Tokyo, but sort of the same. It's like Tokyo is the 20-year-old wild and crazy version of you... full of energy and ready for a good time. And Singapore is you at 30... a little more relaxed... you have a career, possibly a family... priorities. I mean, don't get me wrong you're still the same old you... you still like to have fun... but you no longer wake up every Tuesday morning with a hangover.
And the food... oh... glorious food. One sure fire way to win me over? Feed me. I'll love you forever. Singapore even went as far as to introduce me to Chocolate-Whiskey flavored ice cream. It's like they knew what I wanted before I even knew it existed. God bless you Singapore.
A word from the wise... be wary of the escalators. And this is important. First trip down one of those bad boys and I almost fell flat on my ass. They travel at lightning speed. Greatest accomplishment of the trip? Successfully riding one in four inch heels.
Think you want to try the famous Singapore Sling? Think again. Now, I may be snobby about some things, but liquor is not one of them. I went to school in west texas, where when it comes to liquor it is about quantity... not quality. Needless to say, I know bad liquor. Not only was the Singapore sling the worst $25 drink I've ever had, it was the worst. drink. ever.
When having a day of Zoo fun, beware. Apparently, it's now safe to let animals wander freely about the zoo. The first sign we came across said,
Long-Tailed Macaque
... If you encounter macaques, keep a safe distance and avoid eye contact. Do not tease or feed them. They may turn aggressive and bite.
You have got to be kidding me. Animals that "may turn aggressive" are roaming the zoo, so don't look at them.. they may attack?!?
The only thing less comforting were the signs about the snakes that are also sans enclosure. They said something about how - they often disguise themselves as vines, they are usually docile, but if you have any problems with them find a zoo employee. -
Yeah. Freakin'. Right.
I hate snakes. And the thought of running into one, no matter how "docile" is terrifying.
This now means my whole zoo trip is ruined. I am now searching the vines for snakes, while trying to make sure I don't make eye contact with a monkey. How am I supposed to concentrate on the tigers, giraffes or elephants when I'm trying to leave the zoo without being traumatized by an aggressive monkey or a seemingly ordinary vine that turns out to be a snake.
Chinatown was quite possibly the best Chinatown I have been to in any big city. It was clean and the people were lovely. We asked one of the shop owners for a lunch recommendation and he walked us over 4 or 5 blocks to a restaurant, where he ordered for us because they didn't speak English. It was some of the best chinese food I've ever had.
Little India on the other hand was less impressive, which I found to be very disappointing because I was really looking forward to the visit. Not only were there less people and less to see, but unfortunately, I think I may be allergic to incense... I was there about an hour and left with itchy eyes, singed nose hairs and I felt like my head was swimming. I've never had this problem in Buddhist temples, so I thought perhaps it was a different form of incense.
Seeing as how I know nothing about incense and very little about Indian culture I went to Google for help. 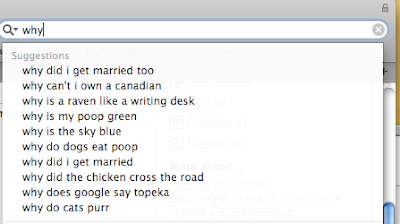 WTF? These are Google's suggestions for "why"?
It was at this point, I got side tracked on a quest to own a Canadian and never learned anything further on Indian culture or incense.
Lastly, before going to Singapore it is important to know the rules.
There is a joke about Singapore being a "fine" city because there are a lot rules and if you break them it will cost you.
Here are just a few:
No eating or drinking on the MRT - Fine - $500.00
Not flushing a public toilet - Fine - $150.00
No smoking in air conditioned spaces - Fine - $1000.00
No littering - Fine - $1000.00
Importing Chewing Gum - Jail Time
Possession of fire works - Caning
Vandalism - Caning
Drug Possession - Death
Singapore doesn't mess around...
Airport security in the Singapore airport was like nothing I've ever seen. There were no men with guns, or drug sniffing dogs. I didn't have to take off my shoes or my jacket. I didn't have to put things in quart size plastic bag. I simply put my bag through the x-ray machine, and they gave it back to me.
It's like Singapore was saying, "We aren't going to put you through the typical airport B$^#*%!, but just know... if you screw up... we. will. kill. you."
Damn, I love that place.
Posted by . at 3:48 AM