We decided to take a trip up to Koya-san, a kind of Buddhist Mecca, to check out some more temples. (But really, I just wanted to hang out with monks.)
It took us forever to get there, seeing as how we took the train with the most stops and transfers. And then..., we didn't even realize we were supposed to switch trains until some sweet Japanese man helped us. Who by the way... wasn't even on our train, but saw us through the open doors and knew we weren't smart enough to get off.
Sweet Japanese Man: Koya-san?
Me: Umm... yes.
SJM: Get off train.
Me: What? Why?
SJM: No, Koya-san. Train stop.
Me: Hmm... ok. (He seemed like he knew what he was talking about, right?)
So we got off the train.
SJM: Nihongo wa wakarimas[u] ka?
Me: *blank stare*
SJM: Japanese...?
Me: Oh! Do I understand Japanese?! Dang, I knew that one too. No, no I don't. (Obviously.)
So then he pointed at the digital signs with his umbrella, trying to tell us where to go. He was very very helpful. I'm mean really... how nice do you have to be to pull a couple of oblivious touists off a train, you aren't even on...? And then tell them where to go? Although, I did feel a bit like a dog when he told us to stay, as he got on his train...
SJM: Stay...
Me: Huh?
SJM: Stay... Next train.
Me: Ooohh... ok.
*** 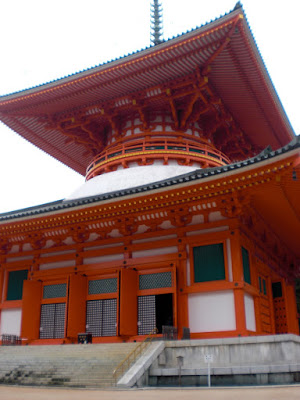 The Dai-to, or The Great Stupa, was my favorite pagoda... how can you not love something called The Great Stupa? Plus, there was a cosmic Buddha inside, and his four attendants... not to mention the super scary guards. I was a little bit terrified.
But of course, you aren't supposed to take pictures of the coolest stuff... although... Lee did take a couple forbidden pictures... partly because he is oblivious to signs which tell him not too... and partly because he thinks that if he doesn't use the flash then it shouldn't matter. Frankly, he is lucky he didn't get struck down by Buddha himself.
***
Walking around the Garan temple complex there were places to buy offerings, get signature temple stamps and to make donations.
Lee: Hmm... Donations for World Peace...
Me: World peace huh? That is a pretty worthy cause.
Lee: Well, how much do you think world peace is worth?
Me: How ever much change you have in your pocket, after you subtract our bus fare... It's freezing, and I'm not walking.
Lee: Yeah, that's what I was thinking.
We ended up walking... and not because we were so kind as to give all our money to the cause of world peace, but instead because we didn't read the bus schedule and all the buses had stopped running. Awesome.
***
I read, that since Koya-san is up in the mountains we should expect the temperature to be about 5 degrees cooler there than in the other part of Japan.
Yeah. Right.
Try just 5 degrees... 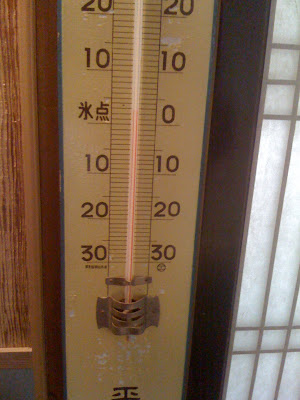 Actually, that looks closer to 3... and that was inside!
We decided to spend the night at a Buddhist temple, in a traditional Shukubo. And it was definitely an experience.
We were greeted at the temple by the head monk who led us to our room for tea... 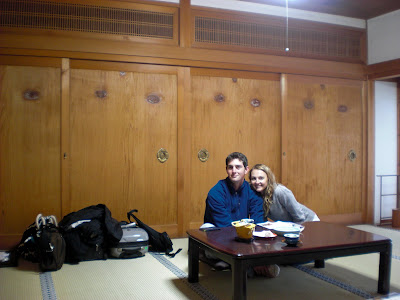 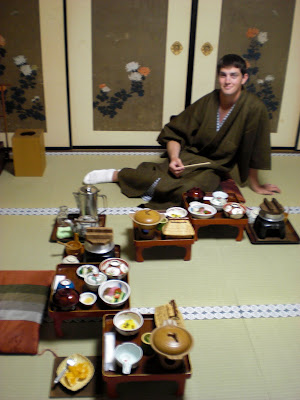 #2. Buddhist monks eat a strict vegetarian diet of no meat, no fish and no onion or garlic. But they do eat a variety of strange vegetables, leaves, tree roots, pine cone lookin' things, various forms of what can only be described as silly putty, wet sponges and tofu. 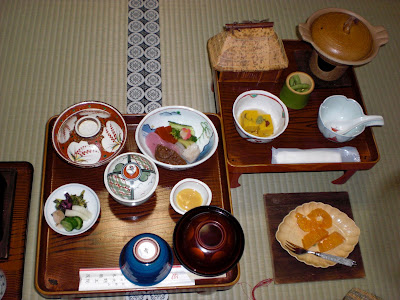 #3. We don't like tofu. No matter what you do to it... soft, hard, in soup, mixed with weird seeds... Not. A. Fan.
Needless to say, dinner was interesting. I have never been so happy to eat rice. I have a real problem with foods with weird textures, so dinner was a struggle. I was trying to eat enough to not be rude, but not so much that I threw up... because let's face it... that's pretty rude too.
After a dinner full of weird faces... swallowing some things whole, and a lot of whispers, ("psst... did you try the pink thing yet? You're gonna hate it! hahaha,") we went back to our room. 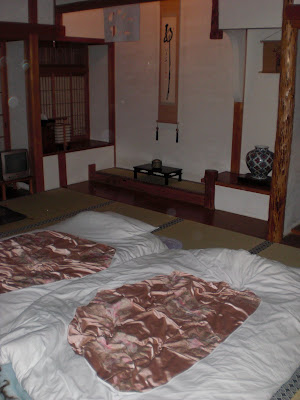 I was excited about sleeping on the tatami mats... until I was actually lying on one, and I realized sleeping on the floor stops being fun around age 8.
But things weren't so bad until around midnight.
That's when the space heater in our room ran out of gas.
Sleeping on the floor, with wet hair, in a room that is rapidly reaching 3 degrees... Now that feels like camping.
It's not like you can call the front desk to have them come switch out the heater... and I wasn't about to roam the halls in search of sleeping monks. So instead, we froze.
The next day we participated in the morning ceremony, and I have never seen anything like that before. For thirty minutes we sat watching and listening to the monks chanting, and humming, then one of them would shake a rattle, and then bang the drum. The "gong" was my favorite part.
Lee: Woah...
Me: That. was. awesome.
Lee: Yeah, after about five minutes I was thinking... this is a long song. And after ten minutes... I was like, this is the longest song I've ever heard. And then they kept going...
Me: Yeah, for like thirty minutes... but I'm pretty sure was a prayer. But what do I know...
Frankly, the whole experience made me wish I had paid more attention in my Philosophy of Religion class...
***
After ceremony it was time for breakfast. Yay...
I'm pretty sure they just took whatever we didn't eat for dinner, and gave it to us for breakfast.
Lee: I could definitely go for some IHOP right about now...
Me: Oooo... or a sausage biscuit!
Obviously, we wouldn't last a week as monks...
Posted by . at 5:34 PM