Our first night in Tokyo we went out for sushi. Of course.
We went to a place, recommended by Lonely Planet, near our hotel called Fukuzushi.
Luckily, most of the menus in Japan, especially sushi menus, have pictures so this made it much easier for us to order. Although, they did end up sending one of the chefs over who spoke English just to make sure everything was clear.
We were trying to be adventurous so we asked the chef to pick out a few things for us in addition to what we had chosen.
His choices? Scallops, which he said were delicious. And Sardines, which are a very traditional Japanese choice... apparently.
Hmm..
Me: I didn't know you could eat raw scallops...
Lee: Looks like you can.
Me: I guess so.
Lee: Hey, I need a... oh... yeah... I forgot about the chopsticks part. This should be interesting.
***
Lee pulled off the chopsticks no problem, and the food at Fukuzushi was amazing. It was some of the best sushi I've ever had! I had never seen sardines that weren't dried, and even raw they were a little on the fishy side, but the scallops were great.
Well... at the time they were great. Let's just say that my previous statement about how you shouldn't eat raw scallops was right on the money, because at 4 in the morning, Fukuzushi's scallops... said "fuku" and made me really sick. (Or perhaps revenge... I can't really be sure.)
I didn't want to spend my entire vacation in the bathroom, and in order not to do so, I knew I needed to get medicine. The problem would be trying to explain to the man behind the counter at the drug store what I needed. He speaks Japanese. I speak English. And I was having visions of me... in the store... trying to explain my symptoms... and the only hand gestures I could think of were way to obscene for public use.
So I made Lee go.
***
Me: Babe...?
Lee: What do you want?
Me: Will you go down to the drug store and tell them you're sick, and get me some medicine?
Lee: Why do I have to go? And why do I have to tell them I'm sick.
Me: Beeccaaauuse... it's embarrassing! Pleeeease.
Because he is amazing, he walked to the store and got medicine. Although, not without being chased down the street by a small Japanese lady offering him, "massage."
***
Lee: I got it.
Me: Yay! So, what did you do?
Lee: I just rubbed my stomach and made a sad face.
Me: Genius! What I was thinking of doing was going to be super graphic... (I start acting.)
Lee: That's gross!
Me: I know!
Lee: Anyway, this is what he gave me. 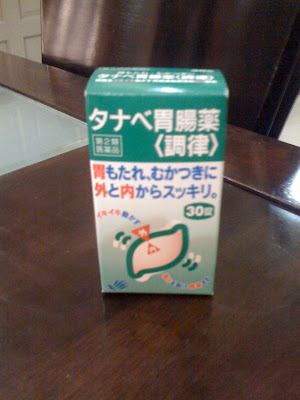 Me: Hmmm...
Lee: I guess that is supposed to be a stomach... and the quotes mean shaky?
Me: Yeah, I guess...
I couldn't read a word on the box, and I had no other choice but to trust the Japanese man not to kill me... and it worked!
I felt much better for the rest of the trip, the only down side was I wasn't able to eat sushi again until our last day there. Fortunately, Japan has the best food in the world so it didn't really matter.
They even had Mexican food! We are very deprived of Mexican food in the Philippines, so when I found out there were Mexican food restaurants in Japan I knew we had to give it a try.
Lee: Are you sure Mexican food is the best thing for you to be eating right now?
Me: First of all, I don't care... And second of all, I'm from Texas... it's exactly what I need...
1 Taco, 2 Flautas, 1 Jalapeno popper, 2 strawberry margaritas, and a basket of chips and salsa later... I never felt better.
Posted by . at 11:23 PM