Whenever people found out my sister was having a baby, I would get a lot of... "oh... you're neeexxtt," or "Babies are contagious ya know." *wink* *wink*
No.
No. I did not know.
No one ever told me pregnancy was a communicable disease.
This is a horrifying concept for a number of reasons. The least of which being the fact that I live an hour and half (on a good day) from the nearest reputable hospital. And while having a baby on the side of an exhaust filled highway in the middle of the Philippines might make for an excellent blog entry, I'm not sure I would survive to tell the story.
So I'd been thinking about this "baby fever" that preys on innocent bystanders when I get this text from my sister...
"This bed is hard, I'm in a buttless gown, I'm in serious pain, I have to go to the bathroom in a portable [sink] thing that old ppl use and I'm hooked up to IVs... I haven't [eaten] in like 12 hours [and] I can't drink either, I didn't get any sleep last night and every four hours an old man comes in, sticks his hand up my vagina and tells me there's no progress."
And this is contagious?!
Fifteen months worth of birth control pills arrived in the mail for me that week.
***
After three days in the hospital my beautiful 8 lb. 7 oz. baby niece arrived.
And being aunt rocks!
It's the best job.
I get to hold her as much as I want... but as soon as she cries, spews milk, or blows a stink bomb in her diaper, I get to give her back. 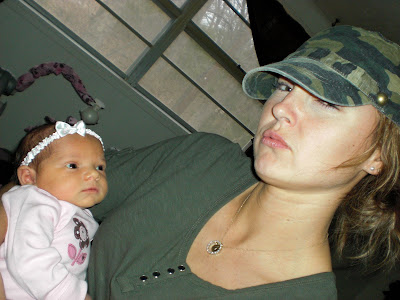 (This picture was taken during one such stink bomb occasion...)
It is amazing how quickly you can fall in love with such a tiny person who does nothing but eat, sleep and poop.
I cried for half an hour when I had to say goodbye before coming back to the Philippines. But she promised me we would Skype, and video chatting with an infant should be nothing but entertaining.
It's been two and half weeks since I've been exposed to a baby, and I am happy to report that I am showing no symptoms of the "baby bug."
Stomach bug?
Yes.
I've had those symptoms for a week.
Posted by . at 9:48 PM