I'm a nosey neighbor.
In all seriousness I'm am the neighbor they show on TV, sitting in her dark house, peering out from behind the curtains. Except usually, in the world of cheesy sitcoms, the nosey neighbor is a senile 75-year-old woman, but I'm just a paranoid 25-year-old with nothing better to do.
This is what I've learned... (actually, I haven't really learned anything... I just judge people to quickly and make up stories about them in my head.)
I'll start with the neighbors to our right.
I've never seen them before, but I've heard them through the wall... and I've smelled their greasy breakfast... so I know they exist.
Although I've never seen them, I'm pretty sure they don't like us. One day our water tank started leaking, and when I say leaking... of course I mean spewing water in all directions, and when I say all directions... I mean specifically into their backyard, and all over their laundry which was hanging out to dry. Oops.
It was an accident... and I hope they didn't take it too badly. I do not want to be on their bad side. They are scary.
A couple months ago... they had a red telletubby dancing in front of their house.
A. Real. Live. Teletubby.
There is nothing scarier than that.
Moving on...
The neighbors to our left...
Now, I'm not really sure who all lives there. I know there is a very nice woman, who let me borrow a screw driver once, and her son. But there are always so many people there, I'm never quite sure who lives there and who does not.
Her son is a little odd. I'll call him Spike. One, because I have no idea what his name is, and two because he looks like a reptile.
Spike's entire back is covered in tattoos... and I know this because he insists on washing his car, shirtless, in the street, almost everyday.
Spike is never very nice to me... I smile and wave to him when I would walk by, but he always ignores me. So... (because I'm childish,) I pretend he doesn't exist. Ha!
And I decided he was a bit of a shady individual. Not because he ignores me, but because a bunch of different people go to his house at all hours... for two minutes or less. And most of the time he meets them in the street... shade-ball? I think so...
I don't know much about the people across the street and to the right, except that they have a baby... and it cries... a lot. I've only seen them through their tiny windows, and their wee little door. Serious, it's creepy. It's a door made for a small child, or perhaps a hobbit. 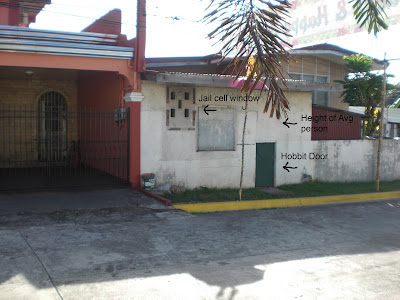 I assume there is another door, but there is nothing more entertaining then watching a van pull up... honk twice... and watching a grown-ass man shuffle out the hobbit door.
Master Jackie, and her daughter live across the street. I call her Master Jackie because she is practically a slave driver. Her poor maid, who doesn't look a day over 14 gets there at six in the morning, and doesn't leave until well after dark. She yells at the poor girl, and makes her wipe down the windows on her car after each of her outings.
However, Master Jackie has been nothing but nice to me... she has been trying to get me to rent her house from her since the day I met her, and insists she will invite me over for coffee and pie or take me to Manila for a "giant" buffet... but both have yet to happen.
The Brady Bunch lives across the street and to the left... they are the most of fun to watch. Their household consists of a man and wife... their five or six kids... (I'm pretty sure there are five... two teenage girls and three younger boys. The boys all look exactly the same though... so I can't be sure, there could be four.)... and grandpa.
Grandpa is the best!
Lee and I spy on him from our balcony...
Me: That guy amazes me. How old do you think he is?
Lee: Who knows?!
Me: Filipino people don't age... they never look as old as they say they are. And he looks oooolllllld... so...
Lee: Yeah, he's probably like 150.
He always wears a hat, half of the hat is pink and half is green. He walks the neighborhood all day with an umbrella hooked to his shoulder. In the past couple months he has planted a garden in front of his house, built a fence out of bamboo, made several of the christmas decorations for our street, cleared out two vacant lots, and burns the brush at least once a week.
And everyday, he sweeps the street in front of our little group of six houses, and this morning he cleaned up the cat poop in front of my house. I love him. He is the most active old man I have ever seen. He speaks almost no english, which is a shame, because I would love to be able to talk to him. But we try... our conversations usually go something like this...
Gramps: Heeelllloooo
Me: Hi, how are you?
Gramps: Ahhhh. (Big Smile)
Me: (Big Smile)
*Awkward amount of time*
Me: Ok, well have a good day.
Gramps: (Waves)
Sometimes he rambles incoherently... and I try to understand, but I usually just smile. Last week though, he said, "Merry Christmas!!! And... and... Happy New Year!" And then he started laughing really hard. I think maybe he's been practicing that. :)
His grand kids are a different story.
The kids go to school... but I have yet to figure out when. It's almost like they go at random, their perfect attendance record must be shot. (Although, no one wanted to get that award anyway. Who wants to be recognized for never missing a day of school? Nerd.)
I know these kids hardly ever go to school, because they spend their entire day outside. I stumble out of the house to let out the dog around 6... half dressed and half asleep... these kids are already dressed and running and screaming about in the streets. I wouldn't have that much energy for hours... even with three cups of coffee.
How long have they been up? Holy Cow.
Then they play in the streets aaalll daaay loooong.
Lately, one of the little boys has been wearing a mask. Like a surgical mask. Like the masks the Japanese wear.
Me: That kid is wearing a mask.
Lee: Maybe he is sick or something.
Me: Well, maybe he should go inside and lay down and not run through the streets.
***
A month later...
Lee: That kid is still wearing a mask?
Me: Yeah! It's really starting to freak me out!
***
And who knows what the neighbors think about us...
Posted by . at 5:18 PM