On day 2 we headed to Dolores, and I am happy to announce we didn't get lost once because of my excellent navigational skills... and probably because it was only about 10 km away. In Dolores we found Jay's Kinabuhayan Cafe Bed and Breakfast.
Jay: Weeelcooome.... (flipping of the long gray hippie hair) You must be The Muse's. Is that really your last name? That is sooo coool. 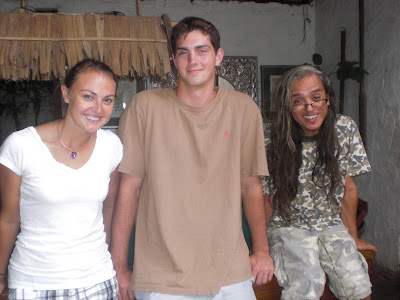 Jay rocks!
And his food was amazing! Not only was it the best food I've had in the Philippines, but it was some of the best food I've had ever... And I love food! I've been called, "The fattest skinny girl I've ever met." (Thanks Hassan.) Because really for as much as I eat I should probably be much bigger.
Anyway... the food was great, even though Jay has been known to experiment with plants to find out if they are edible/poisonous or not. Luckily, he experiments on himself... not on guests. He went out to the street and literally picked our salad out of the ground and off of the bushes.
When we came in for dinner that night there was a samurai sword on the table.
Lee: Sweet! Look at that! Take my picture with the samurai sword! 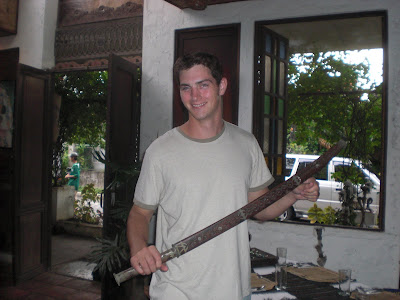 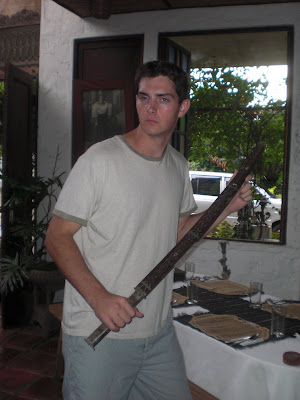 (Lee with the samurai sword looking "scary" and "awesome".)
That night after dinner we played pool with a couple of the guys that work for Jay while taking shots of coconut wine and listening to Rod Stewart... Thinking about it now, it seems kind of surreal... I mean, Rod Stewart? Seriously? Maybe the street side plant salad was poisonous after all... who knows.
Kinabuhayan Cafe Bed and Breakfast is definitely more breakfast than bed. Because the bed is a tree house. I knew this going in. And in theory it sounds awesome. I always wanted to sleep in a tree house, but in reality it's not as thrilling as I thought it might be. 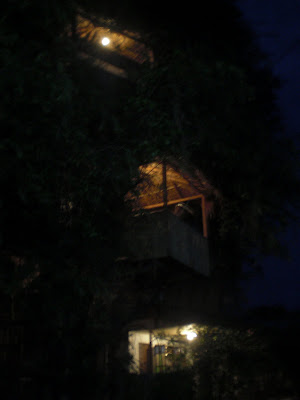 Sure our three story tree house had a bathroom.... 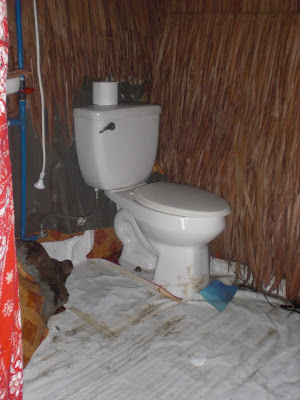 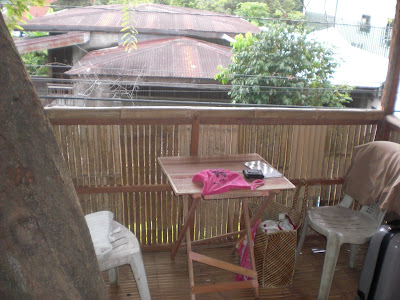 and a mosquito net covered mattress... I guess you could call it. 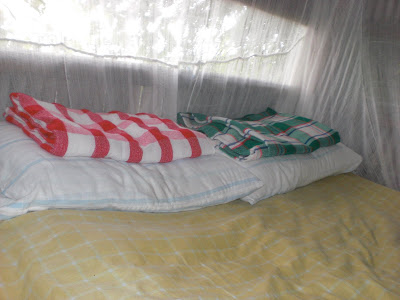 But as hard as I tried I could not sleep. Lee had no problem of course... he snored on as usual... but I was not so lucky.
Me: Hmmm... this really isn't as comfortable as one might guess. And the chances of me rolling over and falling down the steps and breaking my neck are probably pretty good. That would suck.
At least there is mosquito netting... that helps. But there sure are a lot of ants on the other side of that netting. I think they could probably fit through those holes. Hmm... definitely. There's an ant. Awesome.
I'm hot.....
Ugh... that is like the tenth tricycle that has driven by in the last 20 minutes... go home. Go sleep in your bed... your bed that is not in a tree.
Wait... what was that... that sounds like somebody... footsteps.... somebody could easily come up these steps with a samurai sword and chop me into a million little pieces... Lee would probably sleep right through it...*snore*... Yep.
Omg! What was that?! That sounded like an owl. Jay said there were owls. Ewww did it just eat something? I thought owls ate mice. Do mice live in trees? I don't think so... squirrels live in trees. Ya know, I don't think I've seen a squirrel since I've been here.... hmmmm. Are there squirrels in the Philippines? I don't think so... Squirrels eat nuts. There are only fruit trees here... no nut trees. Well, coconuts... but those are really fruit... not so much a "nut." That's kind of weird if you think about it. But even if a coconut was a nut, a squirrel couldn't eat it... coconuts are huge. That's silly... hmmm.
Sleep...sleep...sleep... why can't I sleep? Lee can sleep any where...
I have to pee. I knew this would happen. Too much coconut wine... But I can't walk down those stairs... what if an owl thinks I'm the first known tree mouse, or some tourist squirrel here on vacation? He might try to eat me... and then when he finds out I'm not food, he'll be so mad that he'll peck my eyes out and pull my hair? I'm not going down there!
It has to be getting light soon right???
This went on allll niiiight looong. I think I finally started to drift off around 4:30. At 5:00 Lee's alarm on his phone, which he forgot to turn off, started ringing.... downstairs... which he didn't hear... so I had to go shut it off and brave potential owl attacks. Then at 5:30 the tricycles started up again, and the sun started to rise. At 6:00 there were church bells.... I didn't sleep at all.
***
Fact: Pigs have corkscrew shaped penises.
How do I know this? Jay has a pig, named Onion. After breakfast we found Onion taking advantage of a piece furniture. Not a pretty sight. 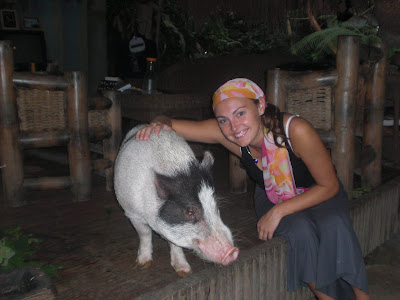 Note: This picture was taken before we found him doing the nasty with a chair... I wouldn't touch him after that.
Posted by . at 9:12 PM