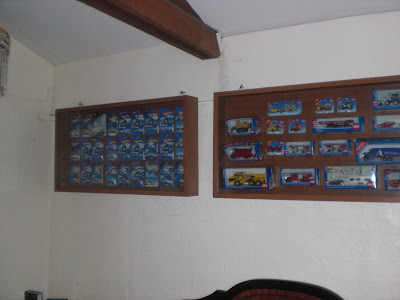 - Half an hour later got upgraded to the Naked Lady theme room... Lee was happier. 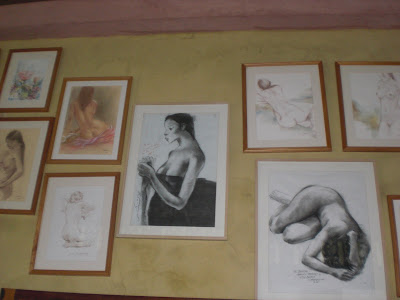 - Ate carabao at Kusina Salud... payback for his carabao brother rubbing his sweat all over me 2 days before. 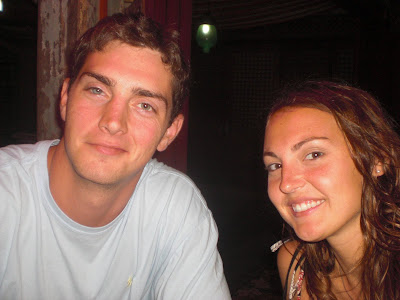 Day 4 - Pagsanjan
The next day we went to Pagsanjan to take a boat up the river to see the waterfalls. We found this sign on the way in... 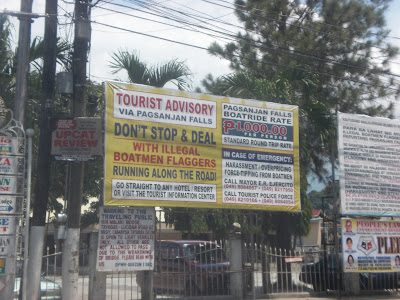 We thought it was pretty hilarious. It sounds like something super scary... "DON'T STOP AND DEAL" (it sounds like a sign against drug trafficking.) "WITH ILLEGAL BOATMAN FLAGGERS" (illegal boatmen... oh no!) "RUNNING ON THE SIDE OF THE ROAD" (Running? That does sound awful! Call the police!)
Apparently they've had some issues with boatmen taking people up the river, and then refusing to bring them back unless they paid them a bunch of money... so the government took over. And now running on the side of the road is a crime...
They call this little adventure, "Shooting the Rapids," which makes this seem dangerous and thrilling. It wasn't. Don't get me wrong it was a great trip, but dangerous and thrilling it was not. Although they do try to get you to wear a helmet... I guess in case the boat tips over and you hit your head on a rock... and they give you some insurance card. In the case of my untimely death they would pass out p150,000... or $3000.... hmmm. I wasn't worried.
There are banca men that drag your happy ass up the river.
I don't know about you... but I was impressed.
The end goal is to reach this waterfall. Once you get there two different men strap you to their bamboo raft and take you underneath the rushing water. It is most definitely the closest thing to being in a hurricane... I would imagine. 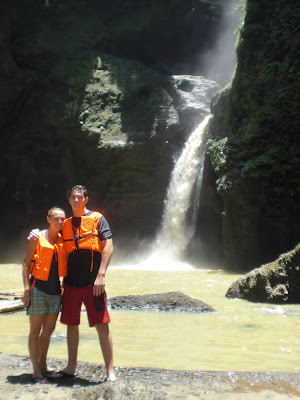 After our river trip we stopped at this place called Exotik Cafe. Sounds scandalous... I know. Exotik Cafe is known for their menu of Exotik "delicacies." 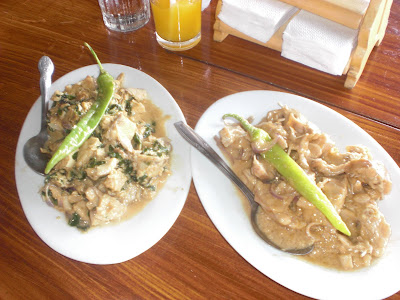 On the left we have shark... I'm pretty sure it was rotten. It smelled awful! On the right we have python... Do you know how many bones a snake has? It's unbelievable. But once we figured out how to eat the dang thing, it tasted like chicken... imagine that. So..."delicacies" not so delicious.
Next we headed up to Paete. Paete is known for their wood carvings, many of which are done in ebony. I was excited to find something to put in our house... unfortunately life size sculptures of Jesus and his disciples are a little over the top for my decorating taste.
While we were looking around in one of the stores a bunch of people started marching through the streets, there were cars and signs and a marching band.
Me: Oh! What's going on? Is there a parade?!
Store Lady: No. Funeral.
Me: Funeral? You have marching bands at funerals? Do you have marching bands at all funerals or is this somebody really important?
Store Lady: All dead bodies important...
Me: Right.... so, for everyone...
Geez...
On our way back I noticed these... 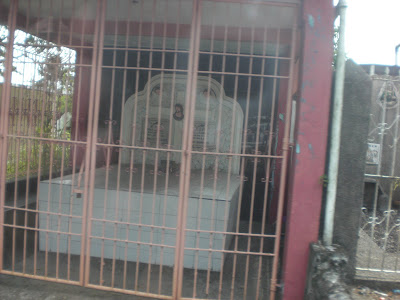 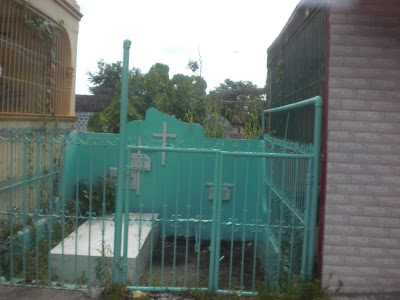 Apparently she was right. This cemetery lined the street out of town, and they are all above ground graves. I had never seen anything like this before.
Then there was this... 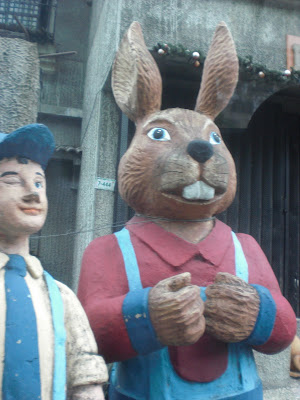 Which just happens to be the creepiest thing I've ever seen... so I had to include it.
Posted by . at 11:55 PM