In regards to the comments concerning the title of my blog and the use of the term, "Third World Country" in reference to the Philippines, here are the facts.
The Philippines is considered to be a third world country according to the geo-political world model from the time of the Cold War. It is considered to be third world because it is not part of the first world which includes western democratic-industrial countries, and it is not considered second world because it is not an eastern communist-socialist state. Instead, it falls into a group with the other three quarters of the world's population known as the third world.
Have my smarty pants knocked your socks off yet?
For those of you who are visual learners... here is a color coded map courtesy of Google. My most trusted source when proving my point. 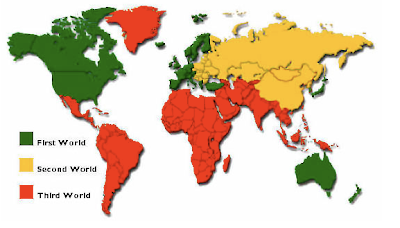 Many think this system is an outdated way to categorize countries, and that may be true. But when explaining your current existence to a person with an average level of intelligence, the term, "third world," gets the point across.
I am aware that these "third world" countries prefer to be called "developing" countries, and that's fine.
There are a number of things I prefer to be called.
For example, aww inspiring, unparalleled supreme goddess of the universe, hell... I'd even settle for keeping things simple and just going with perfect... whatever. The point is, I'm going to call it like I see it, and if you want to also, be my guest.
Plus, "The Undomesticated Housewife - From high maintenance to hell: The adventures of living in a 'developing' country," just doesn't have the same ring to it, now does it?
In case you haven't already figured it out, my blog is not about being politically correct. It is about me... and my opinions, my experiences and the daily life I am growing accustom to one "mis-adventure" at a time. If this makes me a, "typical American bitch," that's fine... it's not like I haven't heard that one before.
Of course, I will obviously replace typical with perfect... as previously mentioned, and we can leave it at that.
I will step down from my soap box to note that my experiences here in the provence may not apply to all areas of the country, and are probably much different from someone sitting up in some lofty Makati high rise. Manila is a wonderful place, it could go head to head with many of the best cities in the world, and it is the place I go to fulfill my need of a little Americanism... and a Starbucks latte.
But you would be hard pressed to get me to trade my experience in Batangas for some cushy condo in the city. It is amazing to me to see the differences in the lives people lead all over the world, and yet realize that we are all basically the same. Being here has opened my eyes to a completely different way of life, and given me a new set of priorities.
Now, I'm not saying I'm tossing the Burberry and forgetting Jimmy Choo... let's be reasonable...
All I'm saying is I feel privileged to have been given the opportunity to be submersed in a society where the people have such an outstanding disposition, even when many of them have so little.
Posted by . at 10:35 PM