"What do you do all day long?"
"Are you bored out of your mind?"
"Are you keeping yourself busy?"
People often ask me what I do during the day...
... to which I will reply... anything I want. Are you jealous?
Because last I checked not having to go to work 50+ hours a week to a job I hate kinda rocks. It's like college all over again... except now I don't even have to go to class. And there are less theme parties now than there were in college... which kinda sucks, because who doesn't like to dress up, drink to much, and make a fool out of yourself? But I'm working on that...
Exhibit A 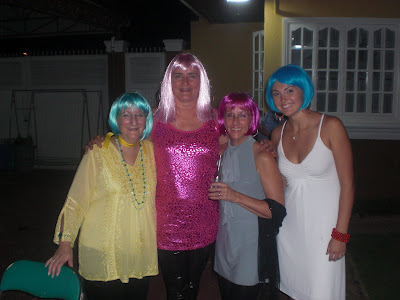 Lynn turned 60... and we were all "wiggin out."
Lee was even less thrilled about the wig than he was about the fabulous hats... surprised?
Anyway...
I think my days go by pretty fast mostly because I'm easily entertained.
Like today for example.
Mall in the morning...
I bought two head scarves, nail polish, and hair clips. You know, the important stuff.
Burger King for lunch... don't ask me why. I don't eat Burger King in the states, and it's my first experience with fast food in the Philippines. Speaking of which I'm starting to feel nauseous.
I hunted cock roaches in the afternoon. Apparently the bug community has been gossiping about me. They found out I was talking smack about my bug killing abilities and they sent the cock roaches after me. No kidding. I've found four in my room since I started making people call me Michael Phelps. And these are not your normal cock roaches... these suckers are like 3 inches long. I trapped one under the bed and used half a can of bug spray on him before he died. I think I was high on bug juice for an hour after, but you gotta do what you gotta do.
Then I watched Juno... awesome movie. "I mean, can't we just, like, kick this old school? Like, I have the baby, put it in a basket and send it your way, like, Moses and the reeds?" Classic.
After which, I labeled and color coded envelopes... You see, I'm trying out this new word Lee is trying to teach me, maybe you've heard of it? "Saving," or some crap like that... If it sounds foreign to you, don't feel bad... we are not alone... it's word most American's haven't learned until recently. Anyway, I decided to take Dave Ramsey's Envelope System advice.... he seems like a tool, but we'll see how it goes. If nothing else I entertained myself by making beautifully colorful envelopes with circles and swirly designs on them. (And yes I realize... my head scarves don't really fit in to that whole "saving"... and "not spending money on something I'll never use" concept... but this plan is not implemented until August. And being that it is July 31st, my money spending diet starts tomorrow.)
The rest of my day will probably consist of showering... so Lee doesn't think I'm a total bum and painting my toe nails purple. What could be more fun than that?
I'm pretty sure being addicted to the internet really helps keep me occupied. I saw this article on Yahoo! the other day, about getting paid to play on Facebook... which is really the ideal job for me, since you can find me on there at least 10 hours a day. I stalk people I don't even know... people should really use the privacy preferences... there are weirdos like me out there looking at your photos. (After, I just wrote this paragraph I googled "addicted to facebook disease," and this hilarious article came up. It figures theres a lame article about it... Dealing with your Facebook Addiction. I don't know what's better.. the article or the comments people left. )
When I'm not on the computer... I honestly feel like that little dude from Home Alone. Like I just got left here by accident. I'm in this big house, all by myself and I can do whatever I want to do... but because I'm a little kid, I can't really go anywhere... so I jump on the bed, watch movies I'm not supposed to watch, and eat a lot of junk. Plus... there have been some houses broken in to in the neighborhood, so now I can plan booby traps. I already have huge spiders all I need is some broken christmas ornaments, swinging paint cans, a blow torch and a hot iron and I can set my plans in motion.
One of these days I'm planning on duck taping my camera to my forehead and making the best video you've ever seen... "A day in the life of me." Then I can prove to you that I'm really not kidding about the bed jumping.
Posted by . at 1:58 AM