After more than 2 months of trying to convince friends and family that visiting me in the Philippines would be the "ideal vacation," Hassan finally conceded. And of course Lee and I were pumped!
We wanted to do something different while he was in town, and we had heard that riding the... and I'm quoting here... "the boney-ass horses" up to the volcano was fun. And the idea of seeing Hassan up on a "boney ass horse," was just to funny to pass up.
The Taal volcano sits in the middle of Taal Lake. Taal volcano is the smallest active volcano in the world, and they call it the "small but terrible"... or something like that. So we charted a boat across Taal Lake to get to the volcano.
It was only after we had taken about 20 pics with our heads next to the "volcano" when the boat man, Raul, told us that what we were taking pics of wasn't the volcano.... great. He said that most people think that is the volcano, and most of the pics and post cards show that piece of the island to be the volcano, but the volcano is actually a much lower point in the middle of the island. He said that the peak we were looking at makes for a better picture, so everyone uses it instead. Yes.. because that makes perfect sense... only in the Philippines.... 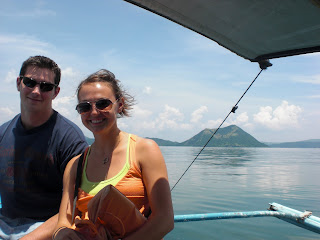 (Notice the life jacket in my hand??? Well, there is a rumor, or a legend, that the Taal Lake "takes"... as in kills... one person every year. And since I'm not sure if it has "taken" anyone yet this year... I wasn't taking any chances :) )
When we got to the island we had to sign in at the Visitors Bureau.... I guess this is in case we get lost up on the mountain, or fall inside the volcano??? Very reassuring...
After haggling over the price of the horse.. (which I'm positive increased by 50% as soon as we walked up..) and getting no where.. we were introduced to our "guides," and our horses.
And by "guide" I mean small child...
Exhibit A 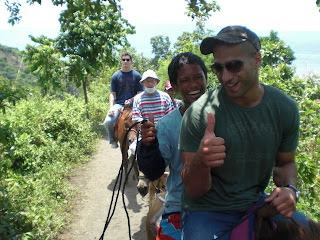 And to make things worse... we saw this child smoking a cigarette later... I mean seriously?! He looks like he is about what? 10-years-old.? Maybe 12?
And the "boney ass horse," is by no means an understatement. This was the smallest horse I have ever sat on, let alone haul my ass up a mountain. If PETA was pissed about fly swatting, then I can't imagine what they would think about this pony exploitation. (Which reminds me... check this out. PETA people have always made me laugh... I mean.. don't get me wrong, I'm all for stopping animal cruelty, but I think there comes a point when they just go too far. This is one of them... it might be the creepiest thing I have seen PETA do... Click here.)
So... I have now signed my life away at the visitors center, gotten on top of a horse I'm pretty sure I could carry up the mountain and my life is the hands of a child. Fantastic.
Here is a little video footage from our trek up the volcano....
Keep in mind, that while my filming skills are usually horrendous they are even worse while on the back of a tiny horse who is huffing and puffing up a mountain. It is a minute and 15 seconds of bouncing that is sure to make you feel sick. Enjoy!

So.. the best thing about this video is obviously how big Lee is in proportion to his horse. I mean, I felt bad for my horse... but Lee's horse??? He was about half dead by the time we got finished. The guide couldn't even ride on the back because Lee was too big... Hilarious!
And did you notice the terrain... not ideal for horseback riding. The chances of the horse tripping and breaking it's legs and mine seemed pretty good. Hassan continuously reminded me to keep my feet barely in the stir-ups in case I needed to jump off. (Honestly.. I don't think it would have mattered... If the horse was falling... I would have been screaming. I'm not the type to be rational and just jump off the horse. I'm not that cool.)
The way down was much easier then going up... and to make things even better, my guide started to play her radio. This next video is worth watching just to listen to her song selection.
Yes. That is George Michael.
Yes. That is Careless Whisper.
How rockin' awesome is that? That song came out in 1984... (the year I was born)... I shouldn't even know that song. How the heck does she? It was too hilarious for me not to record, even if it was only for 30 seconds.
We did make it to the bottom minus head injuries, and without any broken bones... which I consider to be a success! 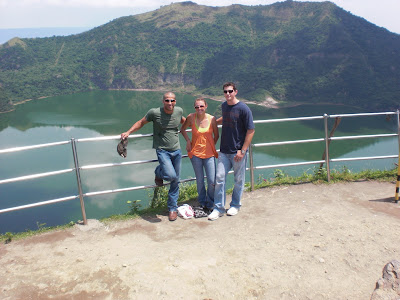 In case you just can't get that song out of your head now... Click here to see the music video!
God Bless YouTube and God Bless the 80's!!
Posted by . at 8:40 PM