I am an accessory to murder...

This post is Rated R due to extreme chicken violence... viewer discretion is advised.
(Especially if you are a vegetarian... Ava.)
(Or if you are extremely sensitive about animals... Courtney. Do not watch the first couple videos if you think you might drown your key board, or splatter your monitor with your spit tears.)
Video #1.... The Killing of the Chicken
Pretty gross huh.
I might need to invest in some sharper knives if I plan on murdering any more poultry.
You know that expression, "Running around like a chicken with it's head cut off." That kept running through my head the entire time. I was just waiting for Chat to lose her grip on the chicken and it go running around the kitchen with its head flopping around. That would have made for a crazy video!
Video #2 - Losing the Feathers...
Weren't you kind of surprised she left the head on for as long as she did? I swear that chicken had one eye open staring at me the whole time. I was thinking more along the lines of take the head off first... then the feathers.
And that chicken smelled horrible. She had told me earlier that the blood of the chicken is what smells so bad, but Filipino people do not like to waste anything, so they eat the blood too. They cook it until it becomes hard, then they cut it in to squares and put it on a stick. So I guess that makes them, Blood Kabobs? Barf.
Video #3 - The insides
Don't you like how she reminds me about the trash? And I remembered. And I'm glad I did, because when I opened the trash can to hang the bags on the fence they were covered in maggots. Yes. Maggots! It had only been one night! And one of those nasty maggots got on me... which led to me shrieking and jumping around like a crazy person in my bathrobe in the driveway. This was quite entertaining to the kids that live across the street, but I didn't find it to be quite as funny. Yuck! Those things give me the heebie jeebies! Lee is now responsible for all trash responsibilities... I have gladly relinquished control.
And isn't it funny how she is worried about the cholesterol in chicken skin? No wonder these people are so skinny. I don't even think about cholesterol in chicken unless it's fried chicken...
No.. scratch that.
I really don't think about it because I don't care.... I miss Babe's chicken... yummmm.
But aren't you impressed with my vast knowledge of chicken anatomy? Or how about my Tagalog to English translations.... genius :)
That whole stomach thing grosses me out. Did you notice I asked her for the Tagalog name like 4 times? I wanted to make sure I knew what it was so when I saw it on a restaurant menu I knew to stay far, far away from it. Who wants to eat digested chicken food? Not me.
Video #4 - Cutting into pieces
How did you like that bone cracking sound? Yuck.... right?
And... over my dead body will somebody kill a piglet in front of me! A nasty bird is one thing... but once you start getting into pigs then I'm out. I refuse to be a part of killing a little "radiant, humble, terrific," Wilber. Yeah... I'm a dork. But I loved the book Charlotte's Web so much that when my dog had puppies I named all the puppies after the characters. There was a Fern, a Homer, and a Templeton and of course Charlotte and Wilber.
I'm getting off track... but pig killing is out of the question.
Yes. I finally touched the chicken. After it was headless and featherless of course.
And yes. I did wash my hands immediately. Haha. It was warm. And not a "just out of the oven" warm, but like a body temperature warm... and that grossed me out.
Video #5 - Finishing Up
Don't you love Chat? I just want to shrink her down and carry her in my pocket all day. She said she had considered getting dressed up because she knew my family would be watching the video, but in the end she didn't. Love her!
So, this was the final product... Chicken Soup with Rice. 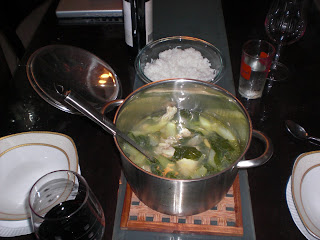 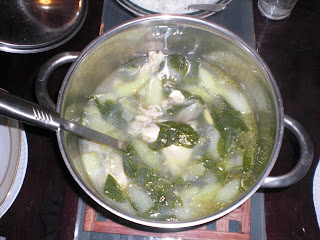 And it actually was pretty good. Chat put in ginger, onions, filipino potato, a green chili and chili leaves. The broth was really good. I wasn't a huge fan of the chicken, but mostly because the bones were still in it so I had to pull them out of my mouth every 5 seconds. But other than that I liked it.
Posted by . at 11:23 PM