Golfing with the Guys

I went golfing for the first time on Saturday. Lee got to go golfing last week at a really nice course... but when it's my turn to come along we end up in some cow pasture. Well, not really... I guess I can't use that expression in the Philippines, because it was nothing like the "cow pasture" golf courses in Texas. It was pretty much the opposite of a cow pasture, it was like a jungle. This golf course looked like it hadn't seen a lawn mower in months. Except for maybe this kind.... 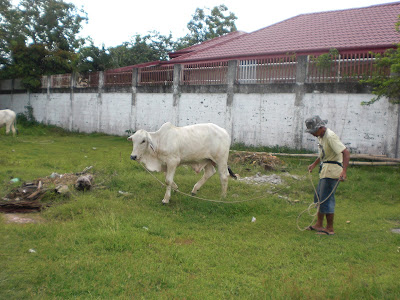 Which ironically is a cow... ha! I took this picture out by our house a couple weeks ago. This is how they mow the empty lots on our street. Every couple weeks this man comes by with his cows and they mow the grass. Which is pretty genius if you ask me. The grass needs to be cut, and the cows need to eat... its a win win.
Anyway, the golf course was kind of a dump but it's hard to beat for the price. We had a rain delay so we could only squeeze in 9 holes, but the cost for 9 holes was p100. Which is a little more than $2.00, but then we had caddies, for p150 about $3.00. So for a grand total of $5.00 we got to play golf! It was pretty cool!
Well except for the fact that my caddie was an idiot. Of course they would give the girl of the group the stupidest caddie they've got. I'm hoping that it was his first day, because he was completely clueless. He knew nothing about the yardage, he didn't know where my tee boxes were, and the only thing he could say to me was, "Hush." Which luckily I found out was his name before I slapped him. How dare he tell me to be quiet!
But frankly I am glad he didn't do everything the other caddies did. Some of them teed up your ball on the tee box and marked your ball on the green which I found to be quite annoying. That's part of my routine... I don't want some guy messing with it. I like things a particular way... my tee at a certain height, and my marker facing a certain direction.
(Can you tell I'm a little anal retentive?)
And there were a few times when one of the guys would hit a ball in the creek or in a bunker, and the caddie would casually move their ball back in the fairway! I swear it was just like a scene from Caddyshack. (Of course my caddie didn't do that because I play by the rules... but he couldn't have figured it out anyway even if I wanted him to)
The only thing my caddie could do was find my ball in the jungle. Unfortunately, I found myself there quite a bit... not that it really mattered since the fairways weren't much different. There was one hole where I hit three different trees, on three different shots from the fairway. The trees hung over the fairway making it impossible to hit a decent shot. I would have been better off hitting worm burners all the way to the green.
Other than that I had a pretty good time. I beat all the guys which always makes my day much better, but I can't say for sure if my score was completely accurate. It is your caddie's responsibility to count your strokes and record your score and I'm pretty positive he couldn't count higher than 5, which turns out worked to my advantage. According to him I didn't have anything higher than a bogie all day. That works for me :)