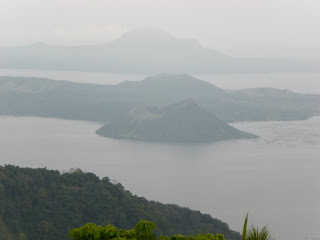 The weekend before last we were invited to go up to Tagaytay. Tagaytay is about an hour away, and it is the town which over looks the Taal Volcano. The Taal Volcano is the smallest active volcano in the world.
We ate at a place called Josephine's, which is a restaurant on a cliff, overlooking the volcano. It was some of the best food we have had since we've been here! 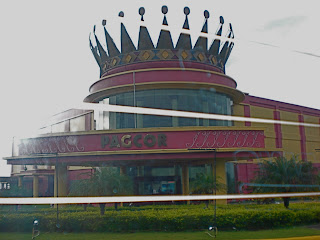 Next, we went to the casino. The big game here in the Philippines is Baccarat. A game which I knew nothing about. So needless to say, I lost. So I tried the Roulette table... because I rocked it when I was in Vegas. But... I lost there too. There are some definite differences between here and Vegas casinos. While in Vegas, I frequently got in trouble for handing money directly to the dealer instead of laying it on the table, and I was threatened several times when I tried to take my chips from the Roulette table before the marker was removed. That stupid dealer had the nerve to tell me he would take away my chips! Jerk. I was just excited to win... gosh.
So I decided I would be extra good at the Filipino casino since there was the added obstacle of the communication barrier. I didn't want to get yelled at in Tagalog. Well, this time I just got yelled at for not taking my money. Obviously the same rules don't apply here. I got that, "You're a stupid American, " look. I hate that.
So I lost money... but Lee won. Which is also opposite of what happened in Vegas.... :)
We had a good time though, and I'm sure we'll go back! 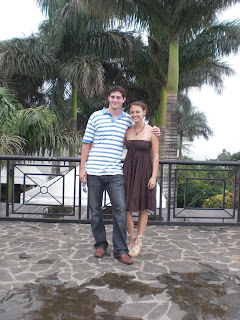 To view more pics of Tagaytay click here!
Posted by . at 6:59 PM