The other night Lee and I were in bed on our computers. We do this a lot. You know how in TV shows they show the married couple both reading in bed...
That's not us.
We each have a lap top instead.
Me: Jon and Kate are getting a divorce.... huh. I'm not surprised, I always thought Jon was an ass.
Lee: Who's Jon... ( He doesn't look up. I can tell he isn't really interested by his monotone automatic response.)
Me: Jon and Kate plus eight.
Lee: Huh? Never-mind, I don't care. (I kind of figured...)
-Silence-
Lee: So... Jon and who?
Me: Jon and Kate plus 8, it's a show on TLC.... and..
Lee: Stop. TLC? I was right before. I don't care.
Frankly, I don't really care either. I think I've only watched the show twice. But over here in the Philippines we lack the day to day drama of reality TV. (Although, I did talk to a girl who asked me about "Octo-mom." Great... I'm glad that's what Filipinos remember about the United States. ) So... I keep myself updated on celebrity scandals by checking E! online every now and then.
But Jon and Kate have been all over CNN. There is a new story or video about them everyday. They are like a bad car wreck... you don't want to watch because they are real people with real lives and real children; and you don't want be in the same class as those gossip hungry rubber-neckers, but at the same time you just can't help it. Plus, they subjected themselves to this celebrity by raising their eight children on TV.
I realize this is completely not filipino related, but Mr. Bigg doesn't care about Jon and Kate either... and it's 4 in the morning state side... so I can't call anyone else about it.
So one more thing before I abandon semi-celebrity gossip...
Let's take a look at the before and after.
He went from Jon: married, plus 8... comb over and a sweater... 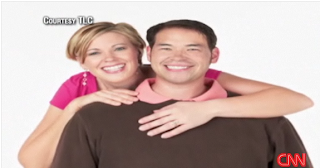 To Jon: minus 9, who discovered spray tan and hair gel. Is this guy totally Hollywood now or what? And has he always had his ears pierced?! 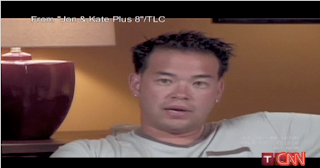