We left for the Philippines almost three months after getting married. During those three months we were supposed to leave several different times. We would get about a week away from leaving and the date would get pushed back. So each time there was a new date set, my mentality was something like, “ I have 1 month until we leave... so I have to eat as much of my favorite foods as possible, because I know I can’t get them in the Philippines.” (I’m pretty sure there was a solid week where I ate nothing but Mexican food.) It was this way of thinking that encouraged my 10 pound weight gain since January. But now I’m in the Philippines, and since the food is actually edible my plan of just starving for 2 years is kind of out the window. So on to plan B... Exercise.
Crap. 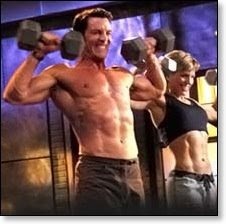 So, today Lee and I started P90X. P90x is an exercise program that comes with 12 dvds and includes everything from pull ups and push ups to Kenpo and Yoga.

Lee got up at 4:00-am to do his work out, because he has to leave for work a little after six. But four in the morning is for crazy people, so I waited until nine. Lee said that if he can get up at four and do it, then he doesn’t want to hear me complaining about doing it since I have all day. Which means he doesn’t know me very well because I’ll probably complain about it no matter what time of day I have to do it.

Before you get started on the program you are supposed to read the guide books, do a fit test and take pictures of your fat self. I started to read the books, they were about eating healthy and taking supplements. Neither of which I’m going to do, so what’s the point in wasting my time?

The fit test... didn’t do that either. I know I’m not fit, that’s why I bought the program, if I was fit I wouldn’t have needed it. I don’t need some test to tell me I’m out of shape. Plus, jumping up and down and touching my toes is irrelevant to my fitness level, I can do that fat or skinny.

Taking pictures of my fat self was the only part of the pre-workout program I actually did. Which was totally hilarious! Lee was at work so I had to do the self timer thing... setting the camera, running across the room in my shorts and sports bra, and then trying to remember which pose I’m supposed to do next. I was supposed to take 6 pics... 2 facing forward - one with my hands on my hips and the other with my arms in the air flexing my huge guns. Then 2 facing the back, with the same poses as the forward facing pics, one from the side, and then one in that “typical body builder pose.”

Taking the pictures was a workout in itself, because I took about 100. I kept trying to get a better picture when I realized it wasn’t going to happen in a sports bra, and short shorts. Plus, I think those poses just make you look fatter. I started out with a serious face, like all the before pictures from those diet pill ads. But I just looked fat and depressed, which I guess is the point... but I didn’t like it. So I opted for smiley pictures instead. I felt really ridiculous when I realized I still had a big cheesy grin on my face during the pictures that were taken from the back.

I thought about putting the pics on the blog so you could see just how ridiculous they actually are, but I decided my humiliation wasn’t worth your amusement. Sorry.

I started my “Core Synergistic” workout and realized a few things...

Number 1 - I am incapable of doing push ups... no matter which modification Tony Horton gives me I just seem to lie there face down, there is no “up” about it.

Number 3 - I get side tracked by the “man girls” in the video. I find myself not doing the exercises, but watching the girls in amazement. They are rolling around, all over the floor with dumb bells, and I can’t do a push up. What the hell?

Number 4 - I fully expect to be standing on a chair whenever I have to do pull ups.

Number 5 - I really get irritated by the trainer’s commentary. It is so annoying. Tony starts off asking, “Are you ready to bring it?!” Is that supposed to get me all fired up? Well, it is going to take more than that. Then he starts to ramble about how the straight lines of this pose are “gor-ge-ous.” I just stand there staring at the TV thinking, “This guy is in idiot. How did he get this job? I bet all the other people in the room just want to smack him. And he isn’t even doing anything... he is just walking around talking while everyone else is working their butts off.” Then I realize I have totally missed a set of lunges.

I have tendency to start to lose weight, and then never do. My diets always start tomorrow, and then if tomorrow does finally come around, it lasts until I start to crave my next cheeseburger. So, by telling everyone that I am trying to work out everyday for 90 days straight, maybe I will actually finish what I started this time.