Tell Me About the Philippines...

Lee and I have been planning to move to the Philippines for quite some time now, and our latest departure date is April 20th. The company that Lee works for has a project in the Philippines which will require us to be there for 1-2 years. We are really excited about the move, and we hope to keep everyone up to date on our adventure.

- is the 12th most populated country with a population over 90 million people.

- is a former colony of both Spain & the United States.

- is one of the only two predominantly Roman Catholic countries in Asia.

- has a presidential, unitary form of government. Presidents are elected to a six year term. The current president - is a woman, Gloria Macapagal-Arroyo.

- is located within the Typhoon Belt, and is struck by approximately 19 typhoons per year.

- has 2 official languages, Filipino or Tagalog and English.

- is currently 13 hours ahead of the Central Time Zone. 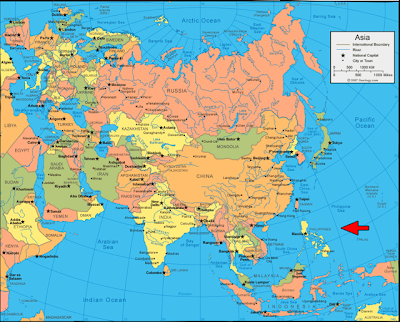