It's gross. I can't get this fish smell off of me, I even washed my hands in bleach... but the smell is still here. Barf.
Yesterday morning I got up at 5 to go to the fish market with Janice. The fish market was awesome. There was row after row of different kinds of seafood. Everything from yellow fin tuna and red snapper to mussels and snails. Each person had a booth and as you walked through the aisles they would try to coax you in to buying whatever they were selling.
The first thing I bought was a red snapper. I think it was just because the color caught my eye, because I don't even know how to cook a red snapper, but it seemed like a good idea at the time. The woman with the snapper picked up a big piece of rock with a sharp edge and began to peel the scales off of one side. Then, with a huge knife she cut it up in to steak size pieces. She handed it to me in a bag... head, tail guts and all.
We bought squid, crab, prawns, mussels and shrimp. We bought the shrimp for my "cooking school" on Wednesday. Janice and I have a deal, cooking lessons for golf lessons. Janice is a "coon ass," as she likes to put it, from Louisiana and can make just about any southern dish you can think of. This Wednesday she is teaching me how to make shrimp etouffee. Janice told me the best way to keep the shrimp fresh is to go home and take off all their heads, put them in a plastic bag, fill it with water, and then put them in the freezer.
Did you know shrimp have heads? Up until yesterday the only shrimp I had ever seen only had tails. Unfortunately, to my surprise shrimp do not come out of the ocean perfectly pink and covered in cocktail sauce. And did you know they have whiskers? And googley eyeballs that stare at you while you rip their little heads off?! Barf. I would have taken pictures of the fish market and my little head ripping experience for you but Lee had my camera... he was golfing.
So Sunday night we made a seafood feast of prawns, mussels and crab. Janice gave me all the leftovers... so then I had to figure out what to do with four crabs and a bowl full of mussels. After a lot of internet recipe research...(I can't be the only person in the world that cooks with the lap top in the kitchen...right?) ... I decided to make a pasta with the left overs. But that meant I had to de-shell the mussels and try and get the crab meat out of those little stinkers. Crab is way more work than I'm willing to do for my food. Trying to break into that crab shell is impossible, and they have horns too! And it didn't help that I didn't have any crab crackers. 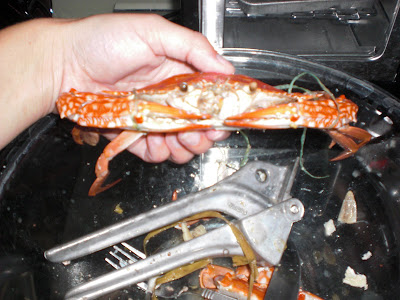 And yes... that is a garlic press. It was the closest thing to crab crackers I had. I thought I was an ingenuitive genius until I cracked a crab open so hard it blew up in my face spraying me with a fishy smelling funk. That nasty crab juice even got in my mouth. Barf! (That has now become my new word, mostly because everything smells funky here and it makes me want to hurl. You should smell the meat section of the grocery store... meat sitting all day not refrigerated nor on ice.... its barf-a-licious.) I cracked open four of those foul smelling suckers and look at how much meat I got.... 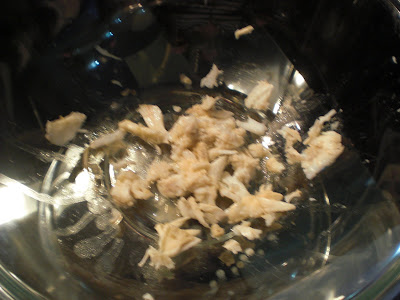 Totally not worth it!
Then I got started on the mussels. I had to dig the insides out of a whole bowl of those things. All I could do was think about what body part they look like while I put them in the bowl... and thinking about how I was going to eat that for dinner later. (I'm too lady-like to go into the details about which body part that is, so if you don't know, you'll have to go pick one out and see for yourself.)
So after crab crushing and mussel mutilation I can't get this odor off my hands. I feel like it gets on everything I touch... I bet my camera even smells now because I took those crab pictures. And now that I'm thinking about it... I bet my keyboard smells too. I just smelled it... I can't tell if it's the keyboard or my funky fishy fingers.
Moral of the story... Seafood is a lot of work... and cooking your own crustaceans is a pain in the ass. Plus nobody wants to sit next to you at dinner afterwards because they smelled you from across the room. Not to mention the fact that having your food looking back at you is pretty creepy. Seafood restaurants really aren't that overpriced. Pappadeaux... totally worth it :)
Posted by . at 2:36 AM