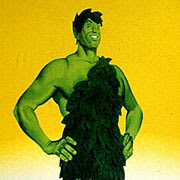 One of the most entertaining parts of being in the Philippines is watching everyone stare at Lee. He is the only tall white guy in the province, the only one I’ve seen anyway. And from the way everyone else stares at him, you would think he is the only tall white guy they have ever seen. When we walk through the malls little girls point at him and giggle. I think it is hilarious, I don’t think he finds it quite as amusing.

The best was when we went to the DMV to get our Filipino drivers license. Not that I’m ever going to drive around on these crazy streets, but it’s a good form of identification to have. First we went to an office to check our height, weight and vision. In order to measure your height you have to stand in front of the height chart. It was Lee’s turn, he stepped in front of the chart, and the little man taking his measurements said, “Uh oh.” Lee was taller than the height chart. I bet this probably wasn’t not an issue they’ve had in the past. The little man looked at the woman who was recording our measurements in shock, they sat there confused for a second before the woman finally just asked Lee how tall he was. It was hysterical.